A Great Night for Progressives – Now Let’s Keep It Going

Tuesday night’s Election Day victories across the country were a referendum on Donald Trump, his enablers in Congress and state capitols, and their regressive and divisive policies. This sweeping repudiation at the polls demonstrates powerfully what the Democracy Alliance and its allies are working and hoping for: The translation of a burgeoning resistance movement into electoral strength. This is a key theme of the DA donor conference that kicks off in Carlsbad, California a week from today.

These victories cover both breadth and depth, from school boards and city councils to governors’ mansions. I can’t think of a single race that progressives had any shot to win where we did not prevail. We provide a handy chart below, but here are the highlights:

Democrat Ralph Northam far exceeded late polling to win a resounding nine-point victory for governor. DA partners contributed considerably to his campaign and DA state funds including the State Victory Fund, the New American Majority Fund, and the Climate and Clean Energy Equity Fund invested in issue and constituency organizations for capacity-building and mobilization across the state.

We look forward to learning more about these turnout figures in the coming days. But the strong year-round organizing, together with aligned voter contact plans across multiple organizations that were led by people in the state helped drive the Virginia victories. This is an affirmation of our State Victory Fund approach of aligning resources to fund state-developed collaborative plans.

Democrats won a contested state Senate district in suburban Seattle, flipping the chamber and giving Democrats total control of the state. The entire West Coast now stands as a blue wall in resistance to the agenda of Donald Trump and the GOP. Manka Dinghra also made history, becoming the first Sikh American to hold elected office in the state legislature.

Democrats flipped two seats in the state legislature, and one in the state Senate breaking the GOP supermajority.

And in municipal races across the country, new diverse leaders were elected to office. African Americans were elected mayors of Charlotte, NC, Statesboro, GA, and Helena, MT. A Latina is now mayor of Santa Barbara, CA, and a Sikh, who overcame a hate-filled campaign against him, will govern Hoboken, NJ.

Undoubtedly there are others we failed to mention or note here. Please let us know of other good news we should be celebrate and lift up at the DA conference next week.

Last night’s victories were not just for those who had their names on a ballot. They were for those who fought back against racist narratives about Hispanic gangs and sanctuary cities in Virginia, and those who had “terrorist” stamped over their pictures on fliers in small cities in New Jersey. And of course, for all who want affordable health care, good jobs, great schools, and healthy communities.

With new candidates surfacing all across the country, and critical midterms just a year away, the 2017 elections give us fresh hope and mighty incentives to step up support of the progressive candidates and infrastructure we need to get the country back on course.

I look forward to the discussions we’ll have about this next week in California. 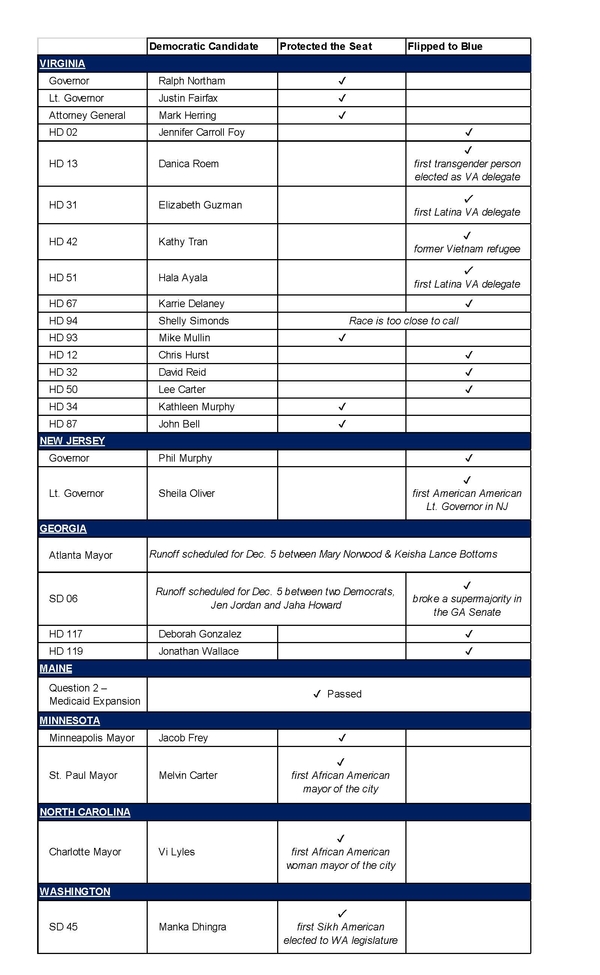 Extremes All Around: Racism, Climate Change, and Recovery